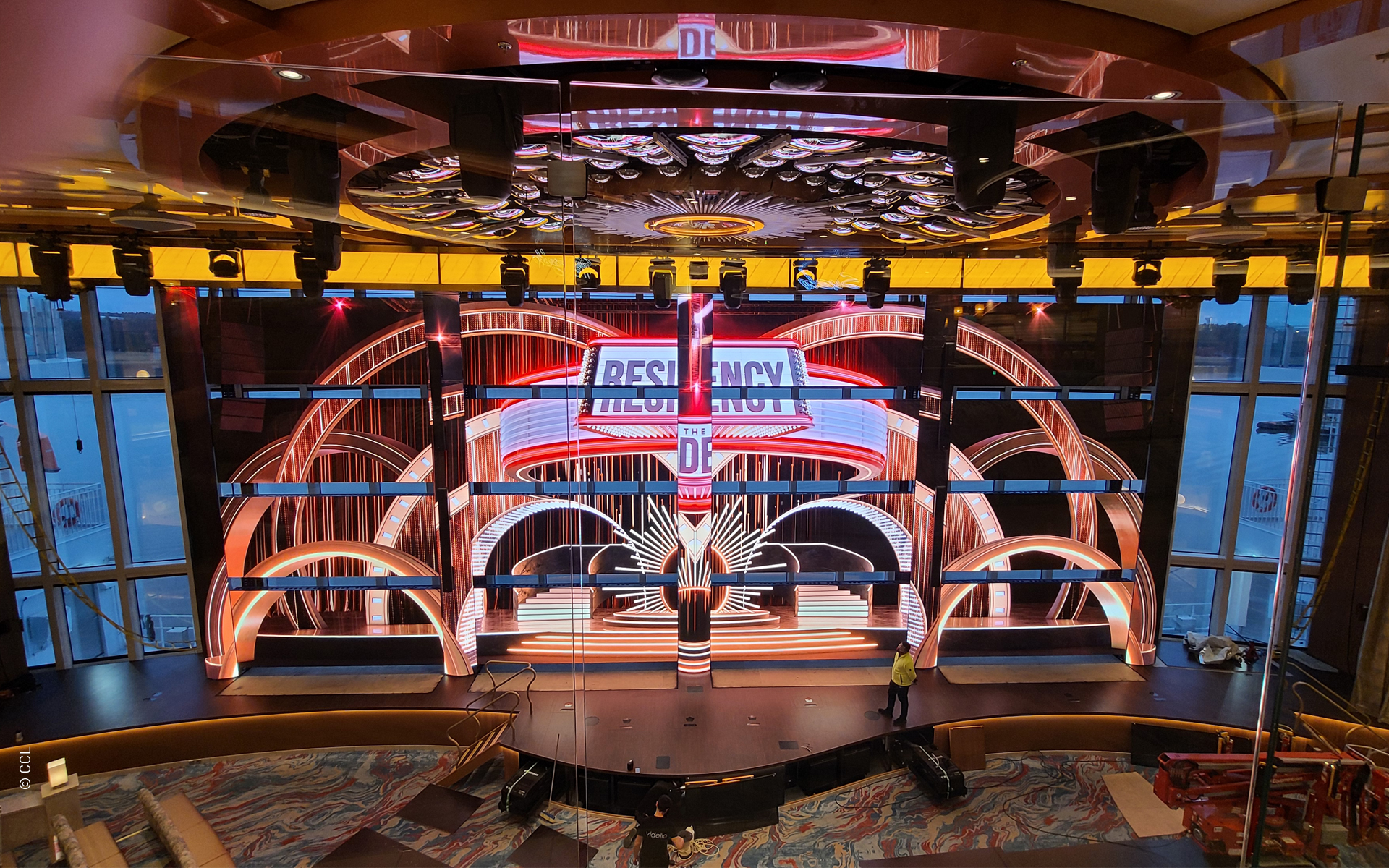 Stage technology on cruise ships is constantly presenting new challenges. Of particular interest is the combination of classic stage technology with light-emitting systems for visual entertainment.

Since cruises have existed, the demands of ocean carriers on stage technology have been steadily increasing. Each ocean carrier has its own design and entertainment departments, which create the concepts for new cruise ship series and assists with planning. In order to offer unforgettable experiences to the guests, innovations in the technical equipment are constantly in development. 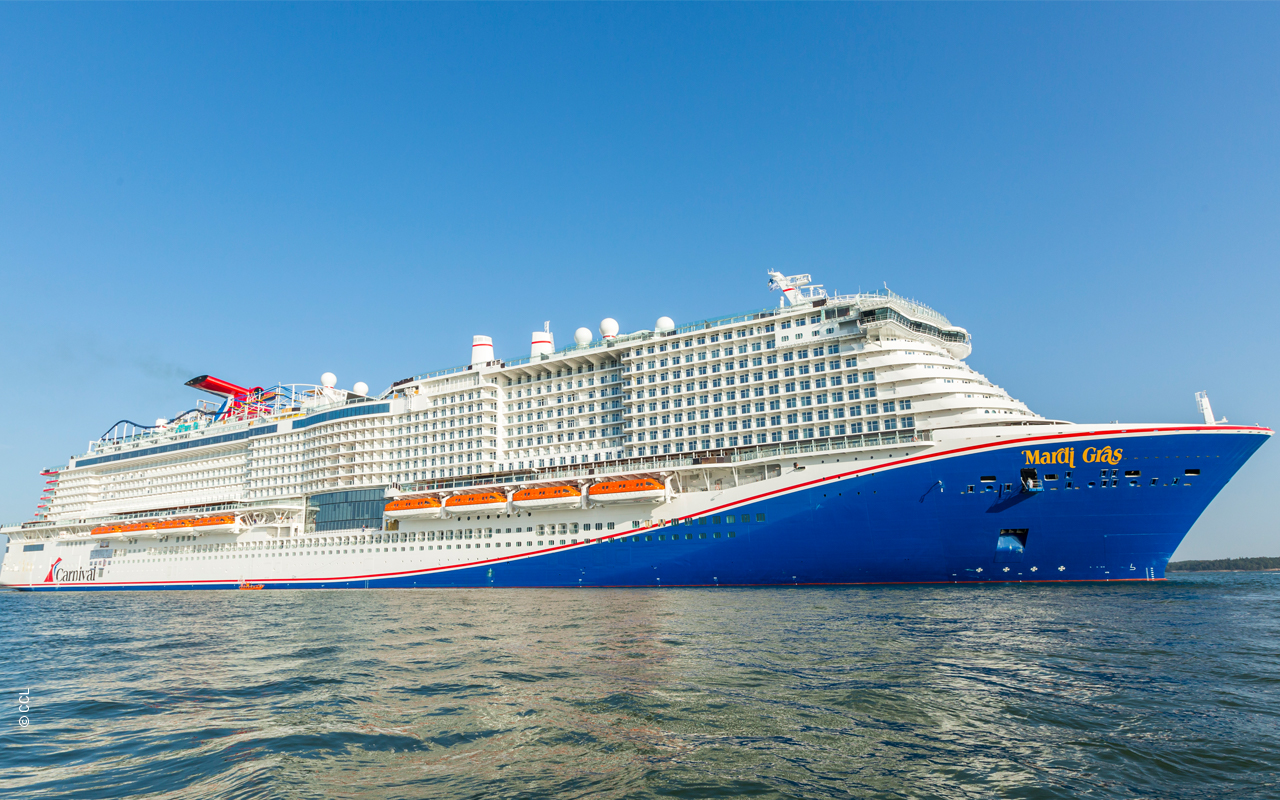 The 16 freely rotatable and vertically moving LED panels are located in front of the curved windows in the atrium. During performances, these so-called “blades” form an LED surface measuring 21 m x 7 m, which can be used to display shows and films. The special feature is that the blades can rotate vertically around their own axis. When the ship docks in a port, the panels are rotated outward. This allows videos to also be enjoyed from the port.

When the video wall is not needed, it can be stowed in the stage and ceiling. To do this, the “blades” are rotated and moved into the ceiling and floor. The so-called “cover panels” close the hatches in the stage floor and can be walked on when locked This means that the entire stage floor in front of the windows can be used again.

“When Mr Raser, the senior project manager who was sitting next to me at the meeting, mentioned the idea of adding a panel to close the stage opening, I asked myself at the time – how is all this going to work out with a 900 mm stage height?”

It became a little too tight but CCL design was able to adjust the height to 1000mm and make the stage shape slight larger and then all fit.

At first, so-called “bomb bay doors” were planned for closing the stage opening. Later it was determined that we could turn the backside of the blades into performance floor. This allowed the blade to be lowered with the LED surface downward and locked into place in the floor, without the necessity of doors or hatches. The back of the LED Blades would just become the floor.

The fact that it was actually possible to implement this spur-of-the-moment idea after an intensive design study resulted in a significant system upgrade. 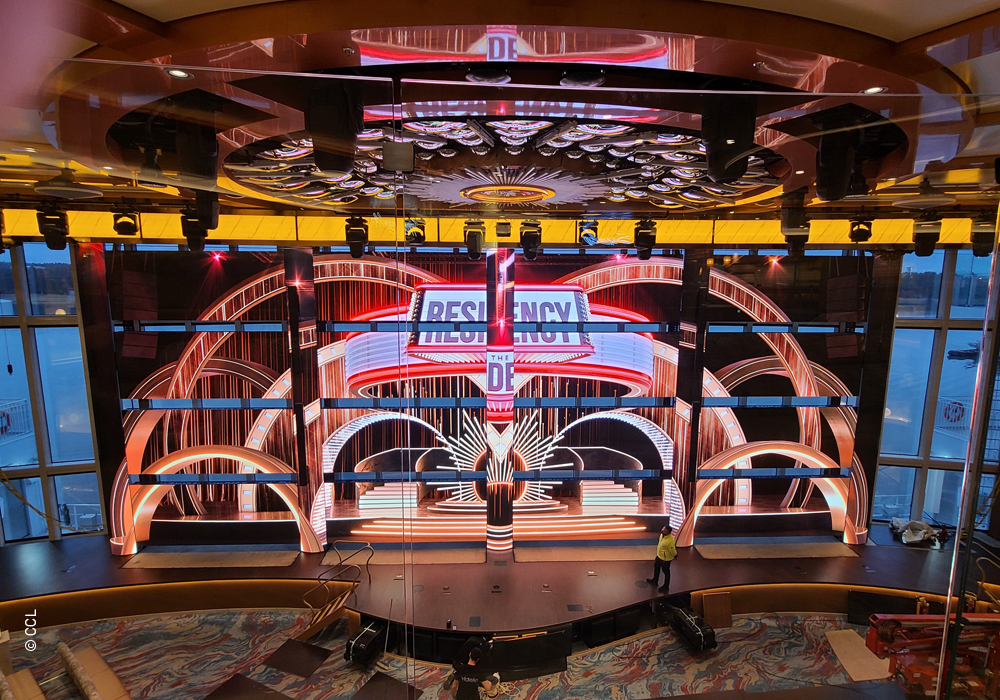 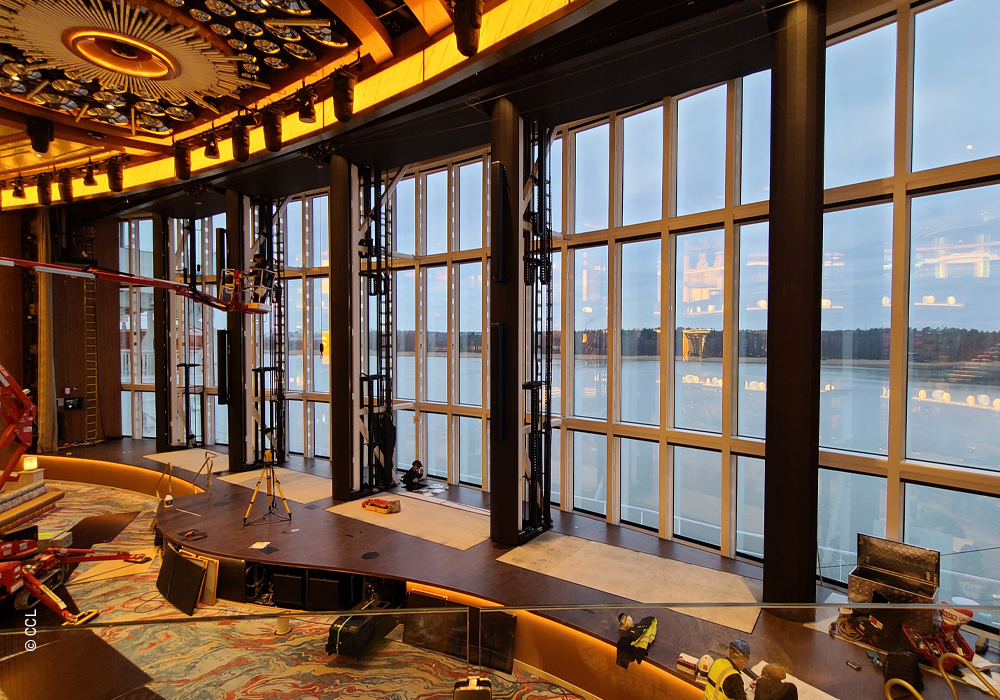 The concept phase was followed by the detailed design phase. A particular challenge was the lack of space for large motors and gears. That means we had to make the drive units very compact and the blade frames in lightweight construction. Mr. Schreder’s “Tetris experience” also helped to utilise the maximum capacity of the stage height. The impressed looks on the faces of all participants during the factory acceptance test showed that Waagner-Biro Stage Systems had met – and probably even exceeded – expectations.

However, for optimal alignment of the blades, an important detail was still missing: The alignment when the blades moved together vertically was not yet perfect. The gear play was too high and the first so-called “centring device” was too inaccurate. This means a gap was visible after the blades had been moved together. In order to fix this problem, a new centring device had to be constructed and installed which, on the one hand, could absorb the gear play and, on the other hand, precisely centre the panels when they were moved together. In the final version, the blades align with pixel precision, so nothing stands in the way of video screenings or cinema evenings in the atrium.

To get some insights into the design department for this project, we asked Karl Schreder for an interview.

How long have you been working for Waagner-Biro Stage Systems?

Schreder: I have been working for Waagner-Biro Stage Systems for nine years now. As a design engineer, I had already been responsible for very unusual podium designs on another cruise ship. But the “Mardi Gras” project was my first with an LED application.

What did you think when you first heard about the project?

Schreder: Since this order was for a completely new design, I thought to myself: Cool, hopefully we’ll get it! I was particularly impressed by the size of the system and the fact that you can see the ocean as a backdrop. 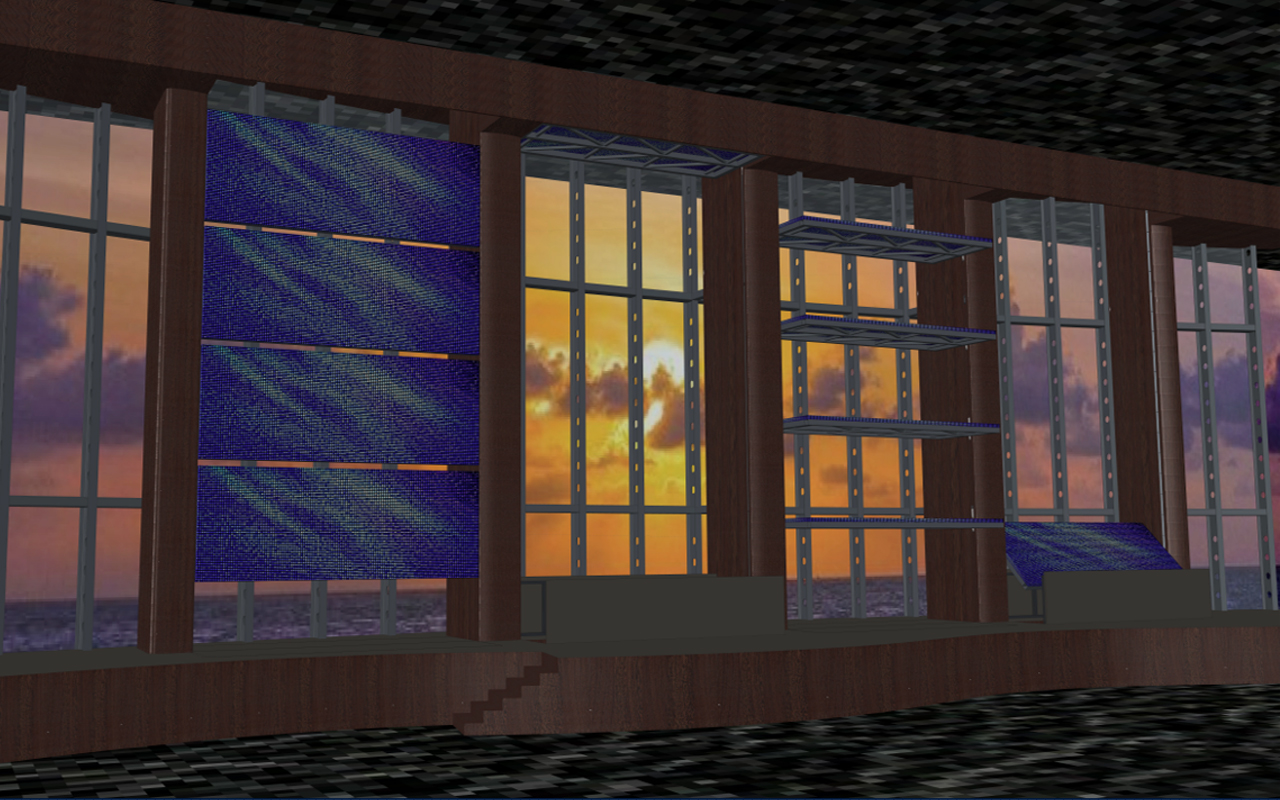 What is special about the stage technology on a cruise ship?

You mentioned your experience with the game Tetris. What does that have to do with stage technology?

Schreder: Just like with Tetris, efficient use of the construction height is always an advantage in stage technology. Instead of the standard of “higher – faster – further”, which applies to the entire system, the goal for the design of the components is usually “lower – leaner – lighter.” A parallel can also be drawn with the increasing speed of Tetris, because the trend is indeed for our system to become faster and faster.

What is the difference in terms of stage technology with other cruise ships?

Schreder: Even though LED systems have become an integral part of the stage technology on cruise ships, the specifications for the blade system on the Mardi Gras left a great deal of freedom when designing the concept. As early as during the sales phase, we were able to present our ideas as animations. For this reason, especially during the concept phase, the need to coordinate with the owner was greater than with other projects. This resulted in very close cooperation with the technical entertainment department at CCL. 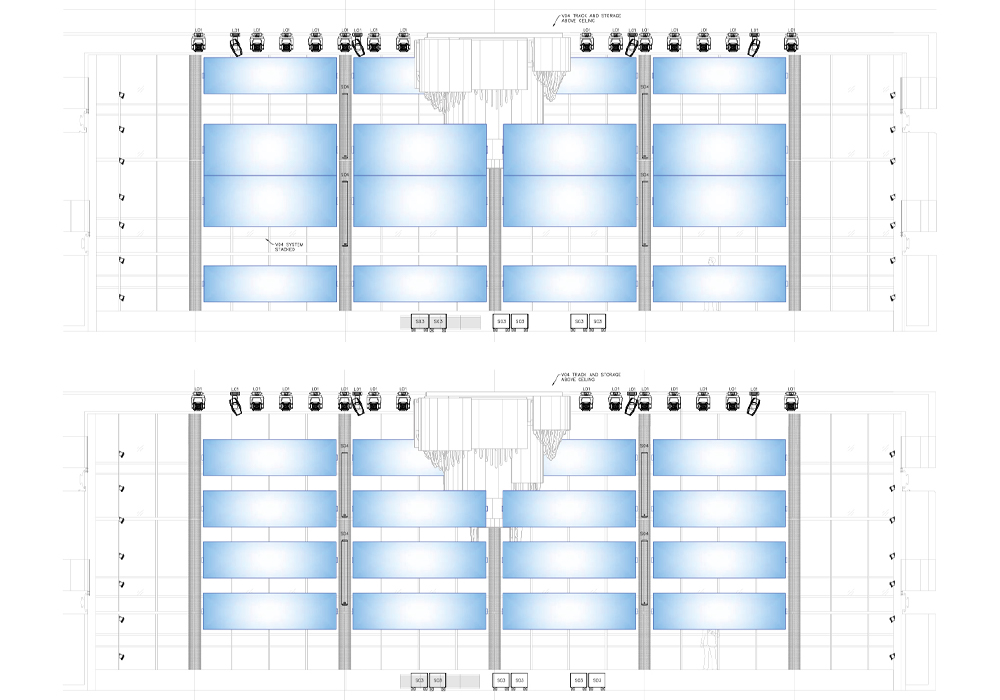 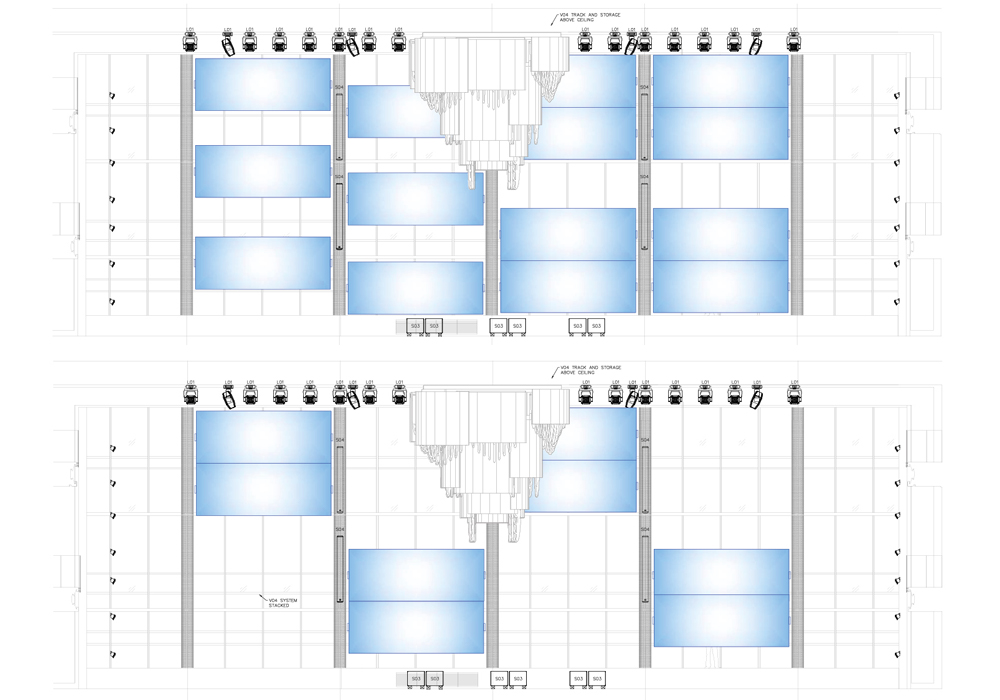 How extensive are the technical drawings for this system?

How does it feel when a project is finally finished?

Schreder: I of course feel proud when I successfully complete a project, and there are also always a few stories from every project that you remember for a long time. Very technically demanding systems entail a great deal of responsibility for the designer. The nice thing about that is that you are also responsible for the success after completion