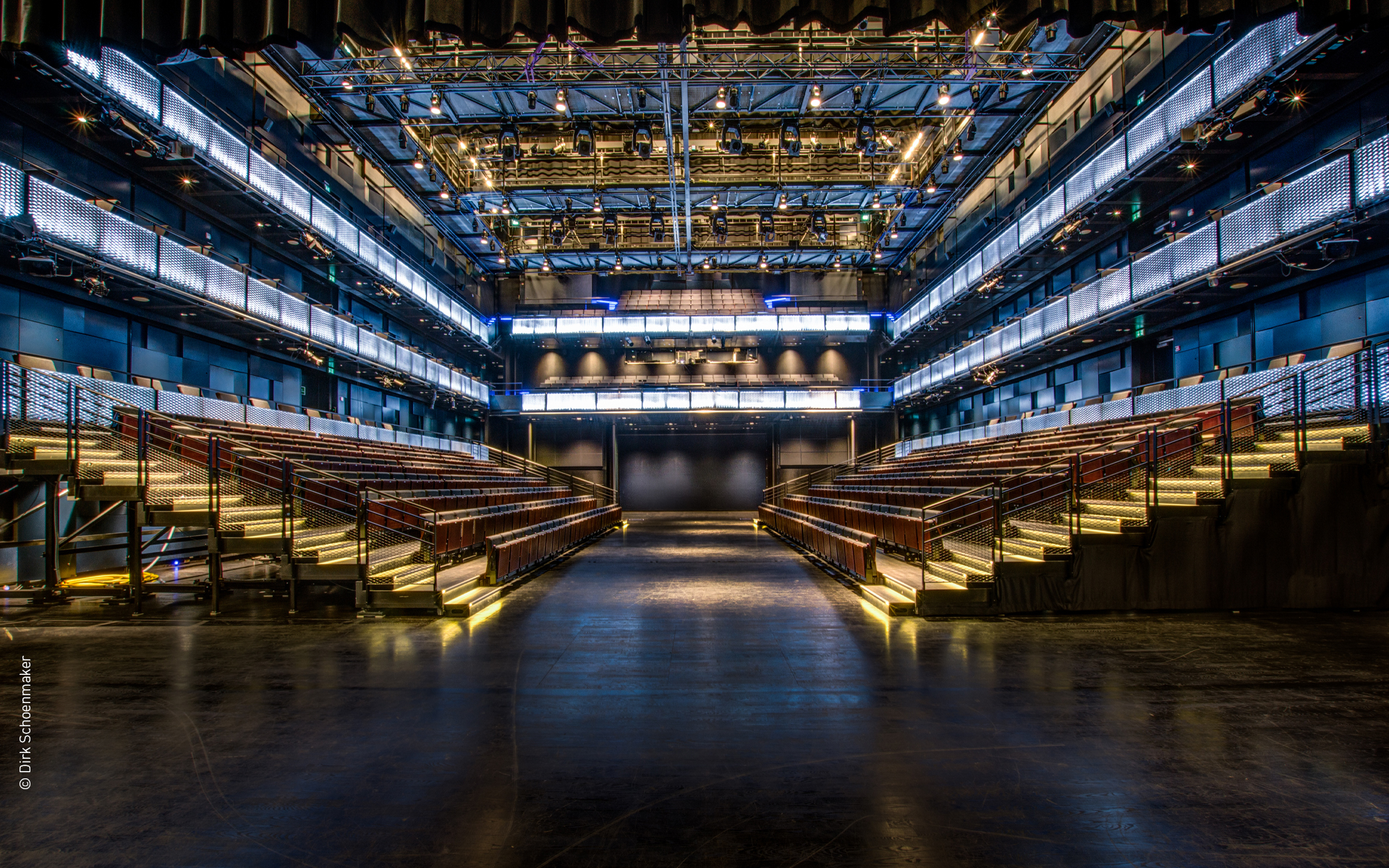 The requirements for multi-purpose halls have been constantly evolving throughout the past decades. Whereas, a few decades ago, it was enough for telescopic stands to be stowed manually, nowadays they have to transform fully automatically.

The requirements on diversity of use have also increased significantly, leading to additional challenges. In the past, the focus of use was on individual sporting and cultural events. Today, it must be possible to use the halls for many different functions. Large multi-purpose halls sometimes use several floors on different levels for this purpose. These can then be used, for example, for cultural events, indoor sports, ice hockey, etc. They can then be changed according to the planned event.

Waagner-Biro Stage Systems has always taken on new challenges in this area, which is why it is still one of the leading companies when it comes to flexible space design in arenas, stadiums and multi-purpose halls.

In the following, we will show you different options for flexible space design with a few reference projects.

One of the most modern automatic telescopic stands was built by Waagner-Biro Stage Systems in the new Rhein Main Congress Center (RMCC) in Wiesbaden (Germany).

This grandstand is a custom-designed system with up to 3,040 seats on three grandstand blocks. The entire grandstand is 39m wide, 8.8m high and the extension depth of the 50 rows of seats is 48m. 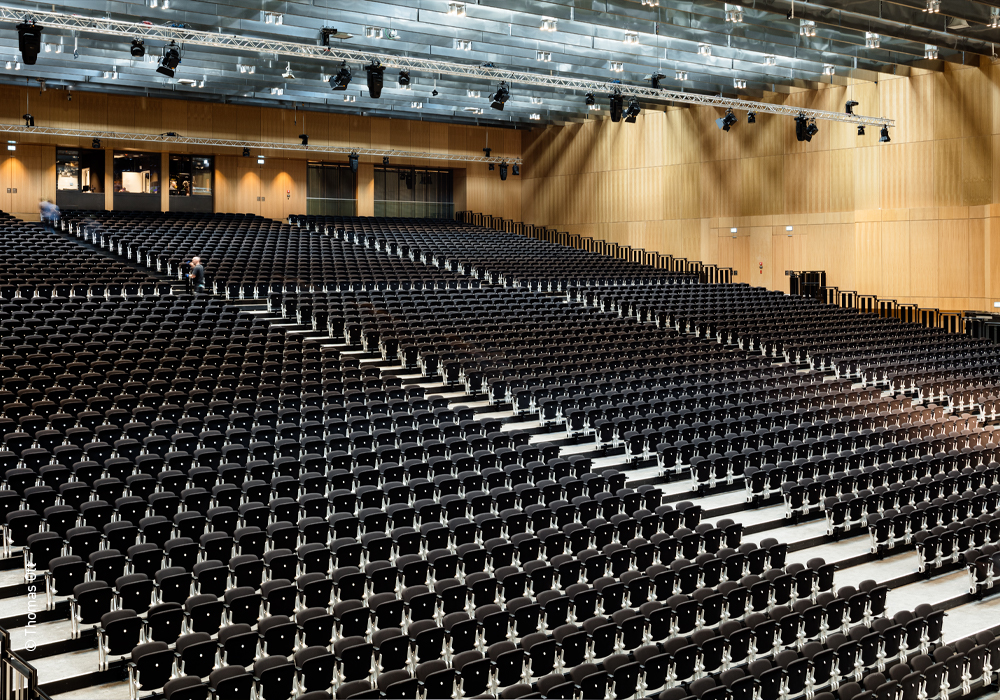 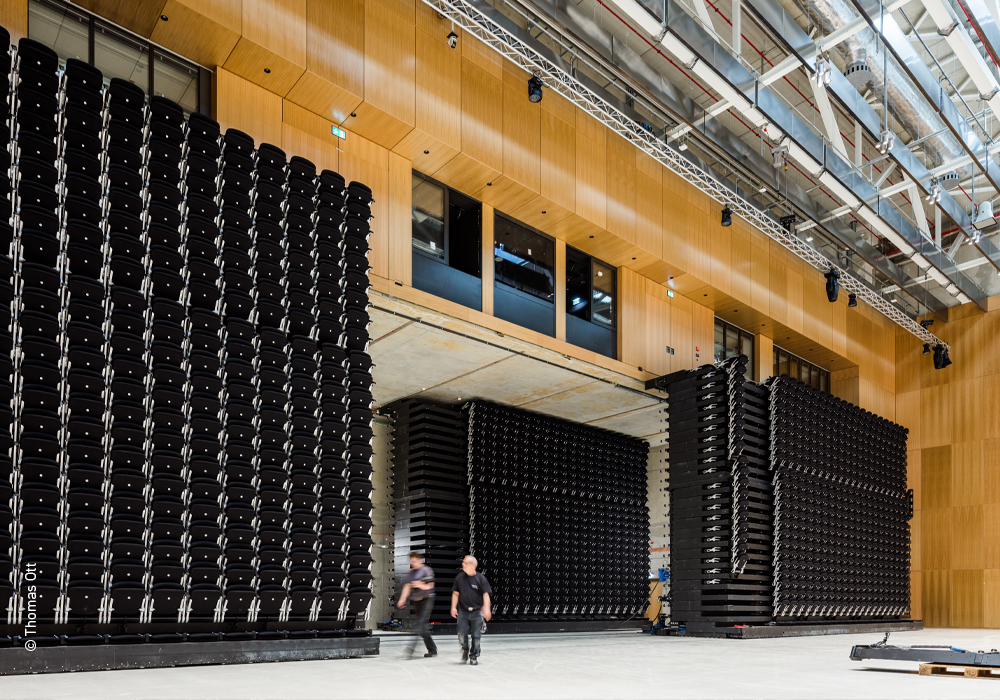 For storage, the entire system must be moved into the storage space on air cushions. The dead weight which has to be moved is approx. 110 tonnes per block. Due to the rather small storage space and the high architectural demands, many other special solutions were developed.

The telescopic stand and the stage technology in the upper stage machinery are controlled by the tried-and-tested Waagner-Biro C⋅A⋅T control system.

In recent years, other concert and multi-purpose halls in Europe have been equipped with a similar fully automatic telescopic stand from Waagner-Biro Stage Systems, such as the concert halls in Kristiansand and Stavanger (both in Norway) and the Elbphilharmonie in Hamburg (Germany). The rows of seats were also partially curved, as was done in Kristiansand, for example.

To give the organisers of the Arena Reyno de Navarra in Pamplona (Spain) the greatest possible flexibility for use of their arena, Waagner-Biro Stage Systems developed a unique solution – the arena can be divided into two areas. The division is created by telescopic stand blocks that are hidden under the playing surface. When needed, these are lifted to the correct level by means of podiums. At the touch of a button, the arena transforms into a main arena and an independent secondary arena.

Using the C⋅A⋅T control, the telescopic stand blocks can be rotated in one direction or the other, depending on which event attracts the largest audience. The result is partly fixed, partly mobile telescopic stand blocks with automatic seat folding mechanisms that provide space for up to 12,000 spectators. Of these, 6,500 seats are on the flexible blocks of the separating system.

With this “key to flexibility”, on the one hand, the traditional national sport of pelota can be practised in the Arena Navarra. Large concerts, trade fairs or sporting events can also take place in the hall. 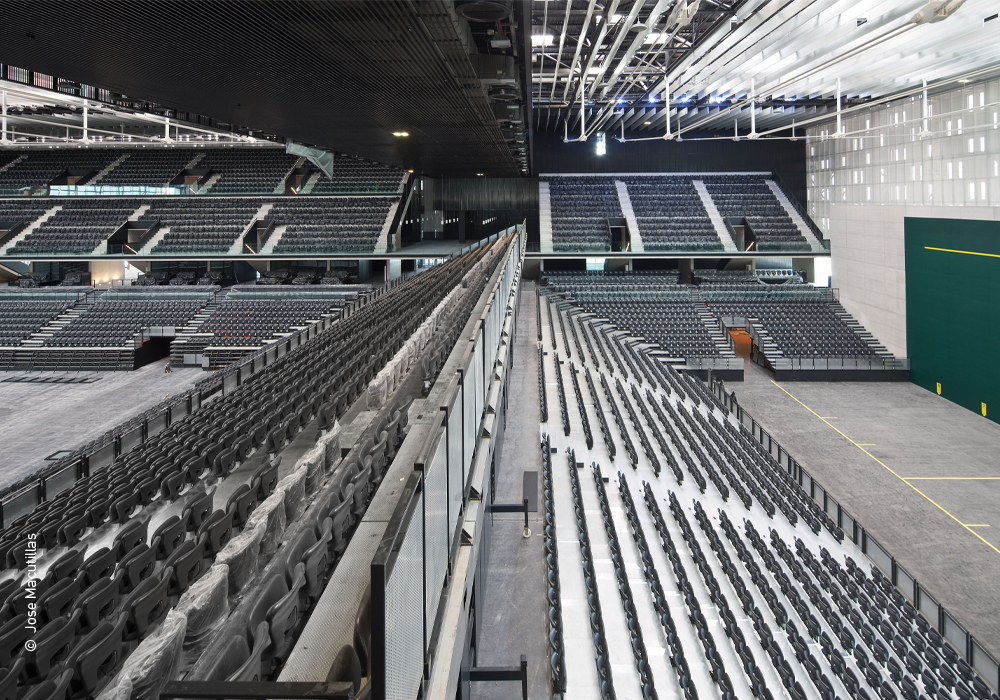 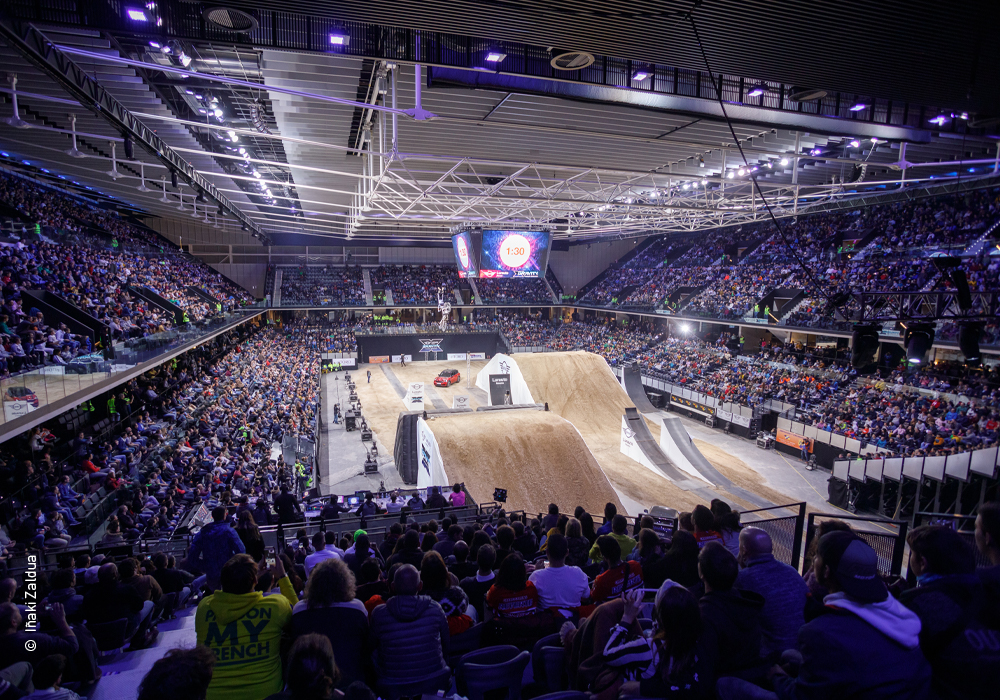 Adjustable seating systems are systems which make it possible to flexibly adjust the seating configuration of an auditorium. These seating systems in concert halls and other venues are particularly demanding when it comes to technical implementation. On the one hand, the seats have to be comfortable for the visitors, but at the same time, the retractable seat structure has to be stable. An additional complicating factor is that when not in use, the seating systems have to be stowed in a floor structure with limited space. With the WB-Venue Transformer®, the auditorium is equipped with strip podiums. The seating systems are integrated into the podiums. Again, at the touch of a button, the seats can either be used or disappear into the floor structure. The podiums can be arranged independently on one level or positioned in steps. This results in a wide range of design possibilities for the auditorium.

The space design also resulted in many different functions for the “Skolkovo” business centre in Moscow (Russia). Waagner-Biro Stage Systems equipped the atrium space inside with a circular, multi-purpose platform configuration consisting of 11 podiums. These in turn are equipped with several secondary podiums to make the spatial concept even more flexible.

With an outer diameter of 19.8 m and a lifting height of 4.50 m above the auditorium floor, 540 seats can be arranged in various circular configurations, such as a conference hall, a stage or an exhibition area. 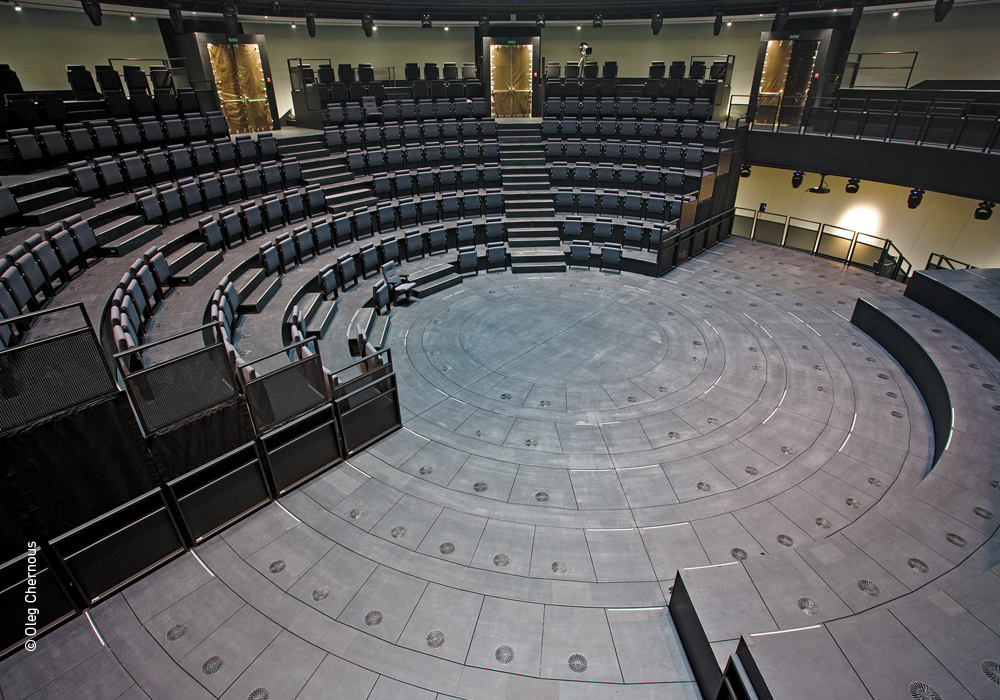 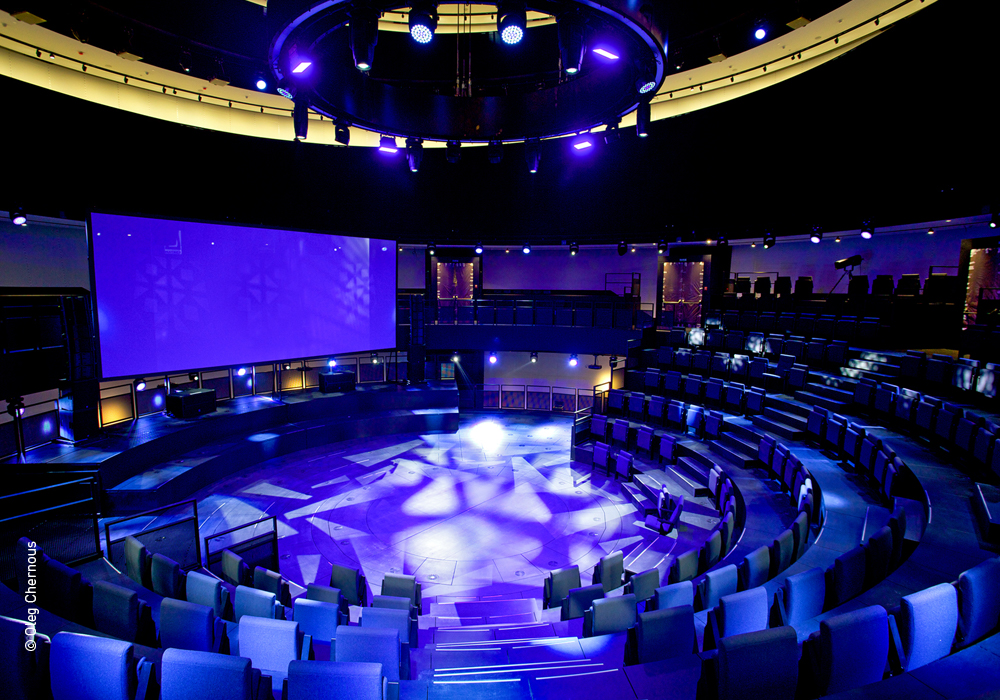 Another technical solution that Waagner-Biro Stage Systems has already used several times is the tiltable auditorium floor. The floor can be automatically transformed from a tilted to a horizontal configuration. The system consists of tiltable main beams that are swivelled around a pivot point. A lever system ensures that the seat rows are in a horizontal position at every possible inclination. The geometry of the seat rows can be straight, rounded or segmented. With this solution, the seats can also be recessed into the floor structure. Waagner-Biro Stage Systems has built a tilting auditorium floor in the Ronacher Theater in Vienna (Austria) and in the Giant Amber Concert Hall in Liepaja (Latvia), to name a couple of examples. 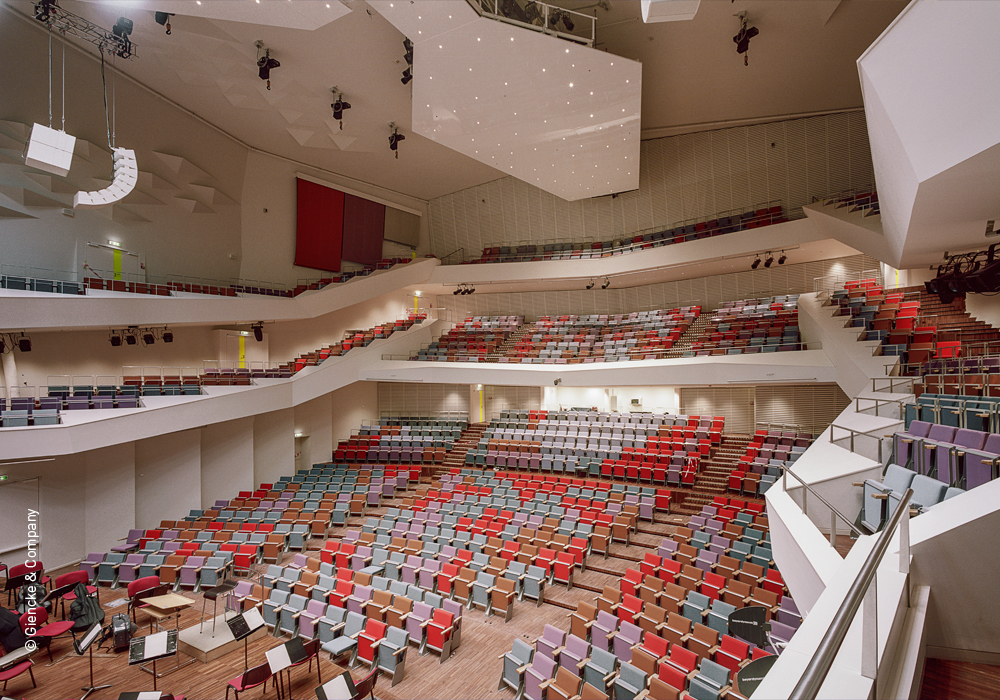 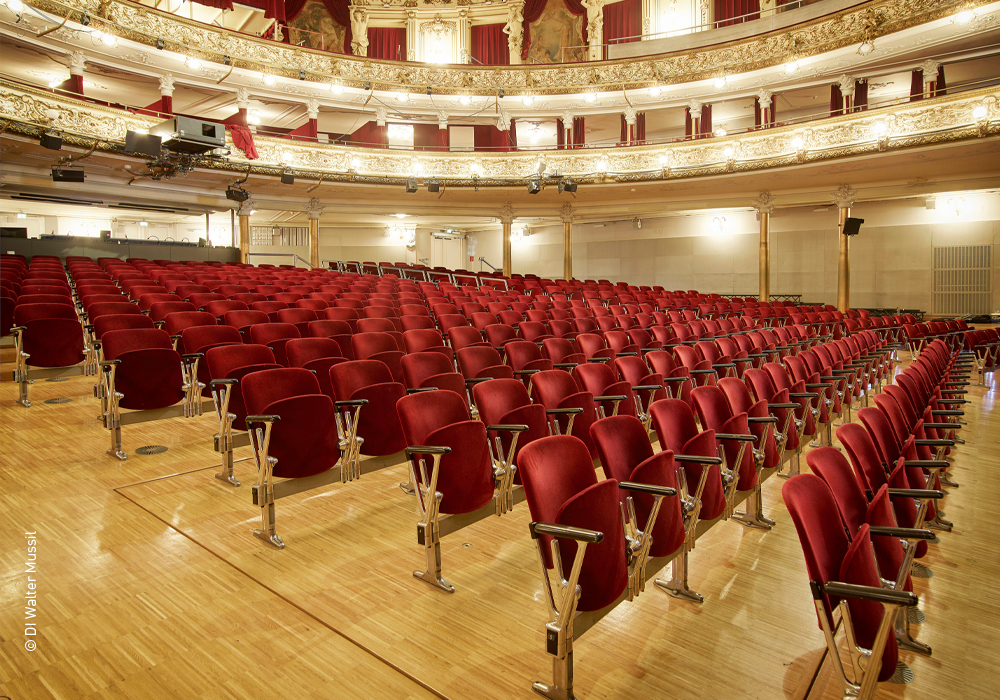 The demand for greater flexibility in the space design of event locations is growing all over the world. Waagner-Biro Stage Systems transforms event locations with their own solutions and developments, some of which have been tried and tested over decades, in order to increase the possibilities of use for event operators, thus giving them decisive advantages in international competition.