How Waagner Biro came aboard and overcame their first challenges

A story by Fred Mäder 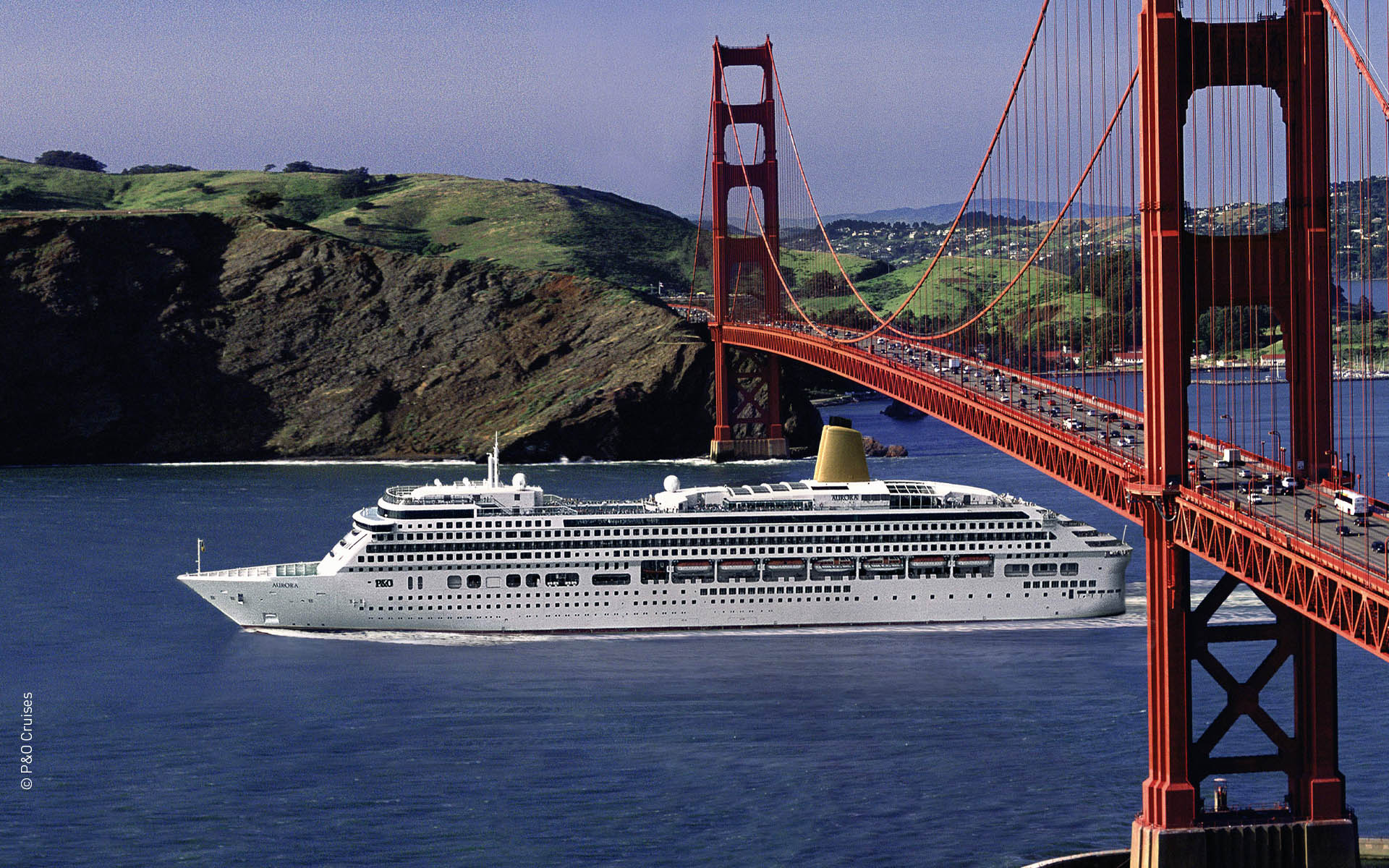 Let’s take a step back in time, a big step… For many years, my colleagues and I at the stage machinery department of Krupp Industrietechnik in Duisburg-Rheinhausen had been equipping theaters on cruise ships with stage machinery in the Meyer Werft shipyard in Papenburg (Northern Germany) – however, when Krupp merged with Thyssen at the end of the ‘90s, the company site in Rheinhausen was shut down. After negotiations failed to sell Krupp’s stage machinery department with all 22 employees to Waagner Biro Austria in Vienna, a private gear manufacturer from Karlsruhe took us over for little money.

However, nobody ever really felt at home in those new surroundings and the crew slowly fell apart. Our sales manager at the time was one of the first to take off; he started building his new career at Waagner Biro Germany in Munich. Good connections to Waagner Biro Germany’s CEO paved the way for a smooth transition. Naturally, our former colleague shared his passion for stage machinery on cruise ships with his new employer and so Waagner Biro Germany and their English subsidiary TELESTAGE came to work on a call for tenders by the British logistics company P&O.

Negotiations were held directly at P&O’s in Southampton. Although both companies were unexperienced in this new sector, they kept competing for the contract, which was awarded to the consortium Waagner Biro Germany/TELESTAGE in 1999. Our former sales manager was quick to reassure the managers: „Once Mr. Mäder and his colleagues are on board, our first cruise ship should be a success.”

The beginning of a new era

AURORA – this was the ship that us newbies, two colleagues and I, would be working on in our new office in Duisburg-Rumeln starting on January 2nd, 2000. Right at the beginning of this new era, we had to deal with a major order. 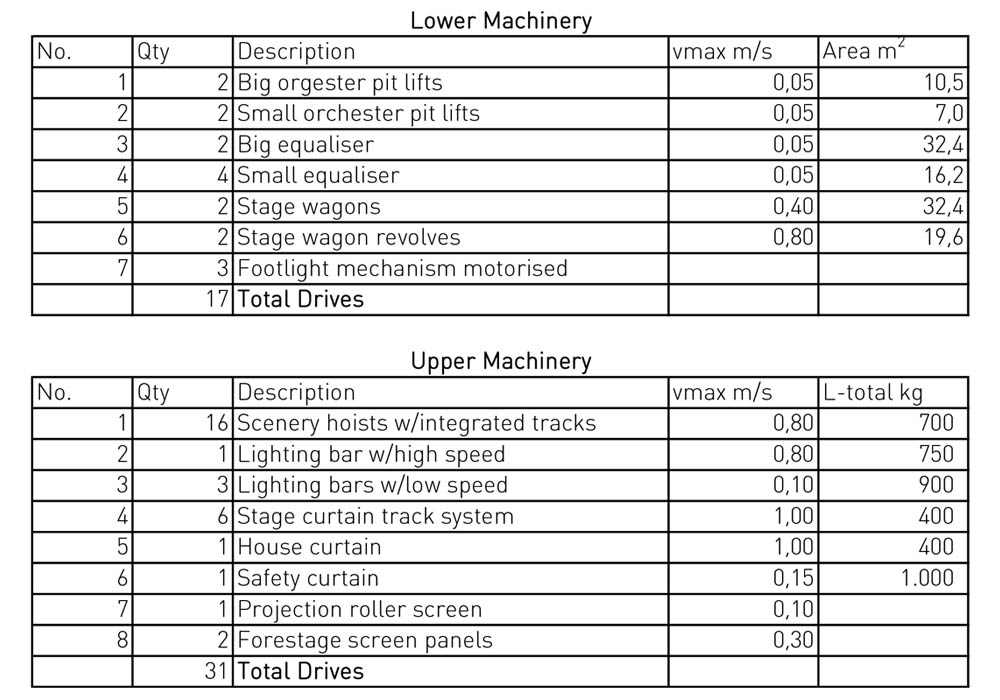 The Main Theatre was equipped with the items listed in the above table. 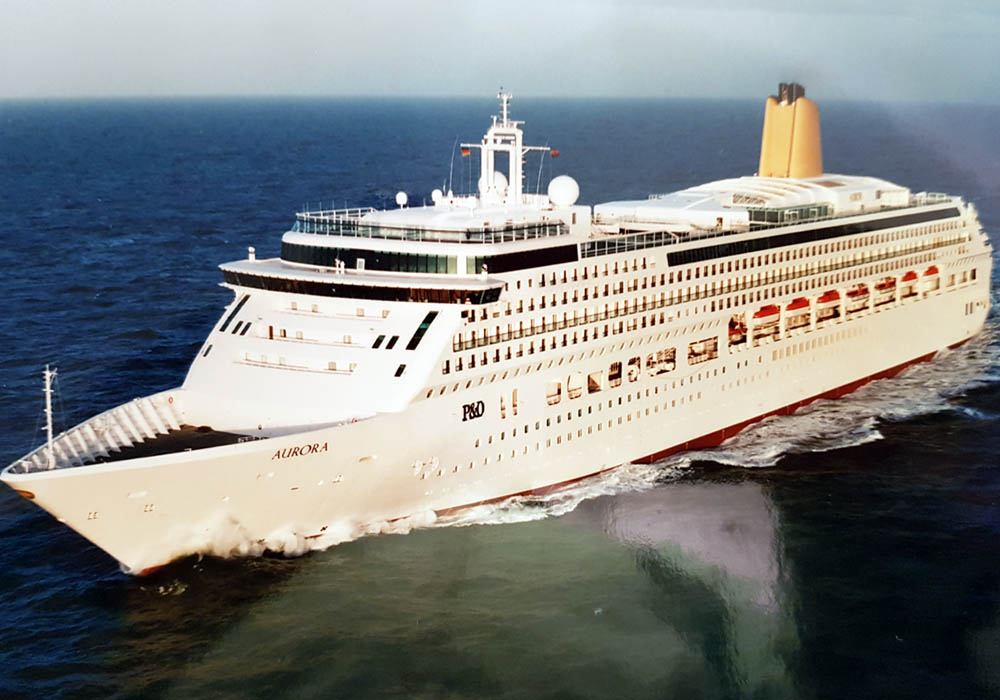 The follow-up ships for RCCL for which we were commissioned in the Meyer Werft shipyard were equipped with considerably less stage machinery items.

At the rear of the ship there was a Nightclub Bar with a two-part stage. Once fully extended, the stage was 100 m2 wide. By retracting the outer half of the stage, the dance floor could be enlarged accordingly.

Waagner Biro received the order for the AURORA relatively late in the course of the overall project. The construction of the ship was already so far advanced that the heavy stage wagons which we had planned could not be transported into the ship through any of the available entries. We were urged multiple times to disassemble the stage wagons into smaller pieces, but this was not possible anymore in this state of manufacturing. We were taken by surprise when, finally, a huge hole with a diameter of approx. 6 m was burnt into the outer wall of the ship on stage level through which we were able to introduce the fully assembled stage wagons. Upon completion of this installation, the metal piece that had previously been burnt out of the wall was reinserted into the opening and the gaps were welded both from the inside and outside and later painted. From the looks of it, you would not have suspected a thing.

That was not to remain the only peculiar feature of our first mission to build a stage on a new cruise ship.

At the time, the safety concept SIL 3 was not yet a thing. The main security requirements were double brakes which had to be tested individually with an overload of 25%. The security experts of the so-called “Schiffsklasse DNV” were at the time only interested in load testing the brakes as far as stage machinery was concerned – and rightly so. The tests of the first 19 fly bars ran smoothly. But then it happened: during the test of the second brake, a heavy load hoist crashed onto the – fortunately – covered stage, practically in free fall.

After a moment of shock, no explanation was to be found at first; we checked the control system but found no clue explaining the faulty behavior. Only after disassembling the drive did we find the brake covered in oil, which had caused the drive to slip. A faulty sealing ring at the gear box had let a thin stream of oil leak into the first brake mounted next to the gear box. 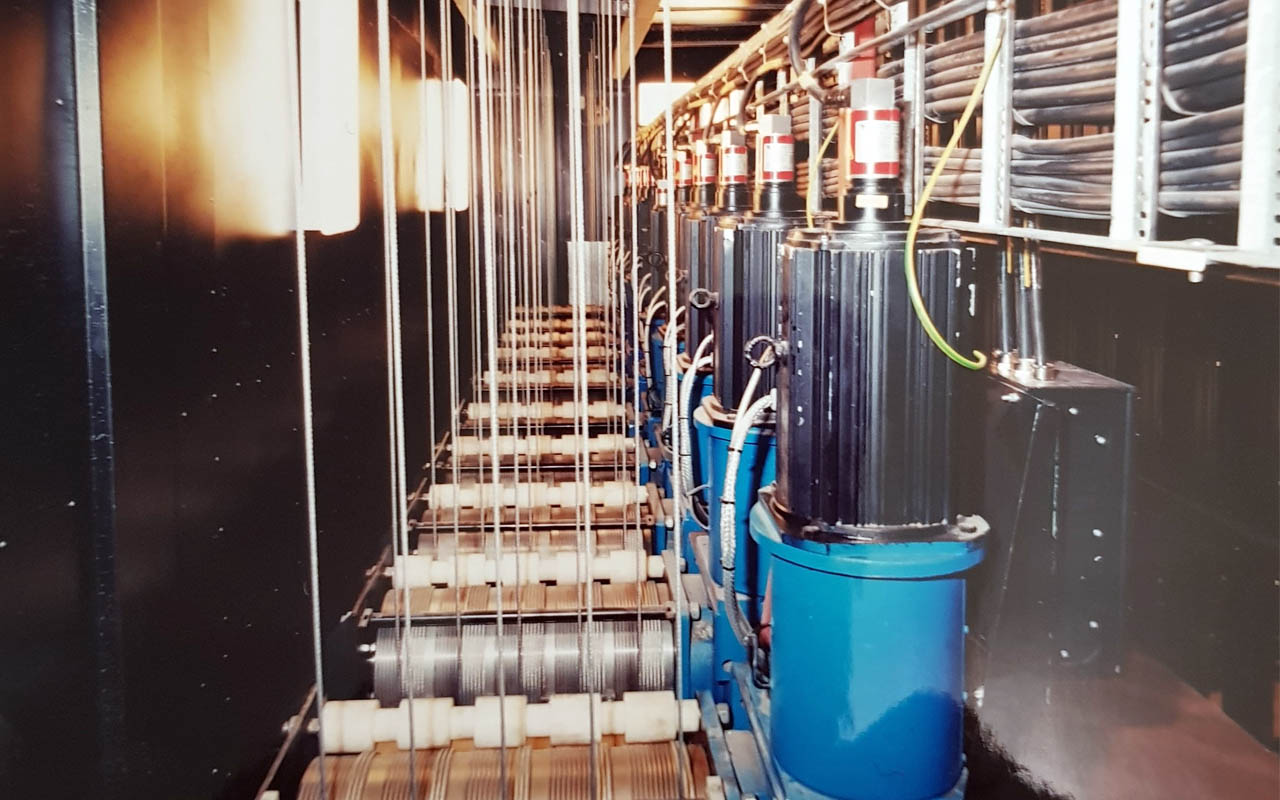 The second problem was caused by the GALA Spiras. Each of the four orchestra pit elevators was mounted on four 9“-Spiras. It was a known fact that Spiras always had to be preloaded to keep them from falling apart like mainsprings. In contrast to the mainland, the pitching of ships in heavy seas can result in lifting forces. So as to completely rule out the risk of the Spiras being destroyed, all orchestra pit elevators had to be locked in both the upper and lower end position. Therefore, four elevators with two moveable locking bolts each needed a total of 16 adjustable openings for the bolts.

These openings had to be aligned in the fixed ship structure at the top and at the bottom. A “fixed” ship structure was something that one of our colleagues, our first start-up engineer on the ship, could only dream of. Once he had finished his work in the upper part, he lowered the elevators back down, hoping to find the previously adjusted holes in their right place. The continuous deformation and distortion of the hull, however, forced him to drill bigger and bigger holes.

Our site manager from TELESTAGE had another shocking experience when he entered the pit room one day. The painters had leaned a number of simple ladders against the extended Spiras in order to coat the underside of the elevator platforms. Fortunately, a collapse of the Spiras could be prevented just in time. On later ships we replaced the Spiras with SERAPID Linklifts – and we were the first to do so in the industry sector. 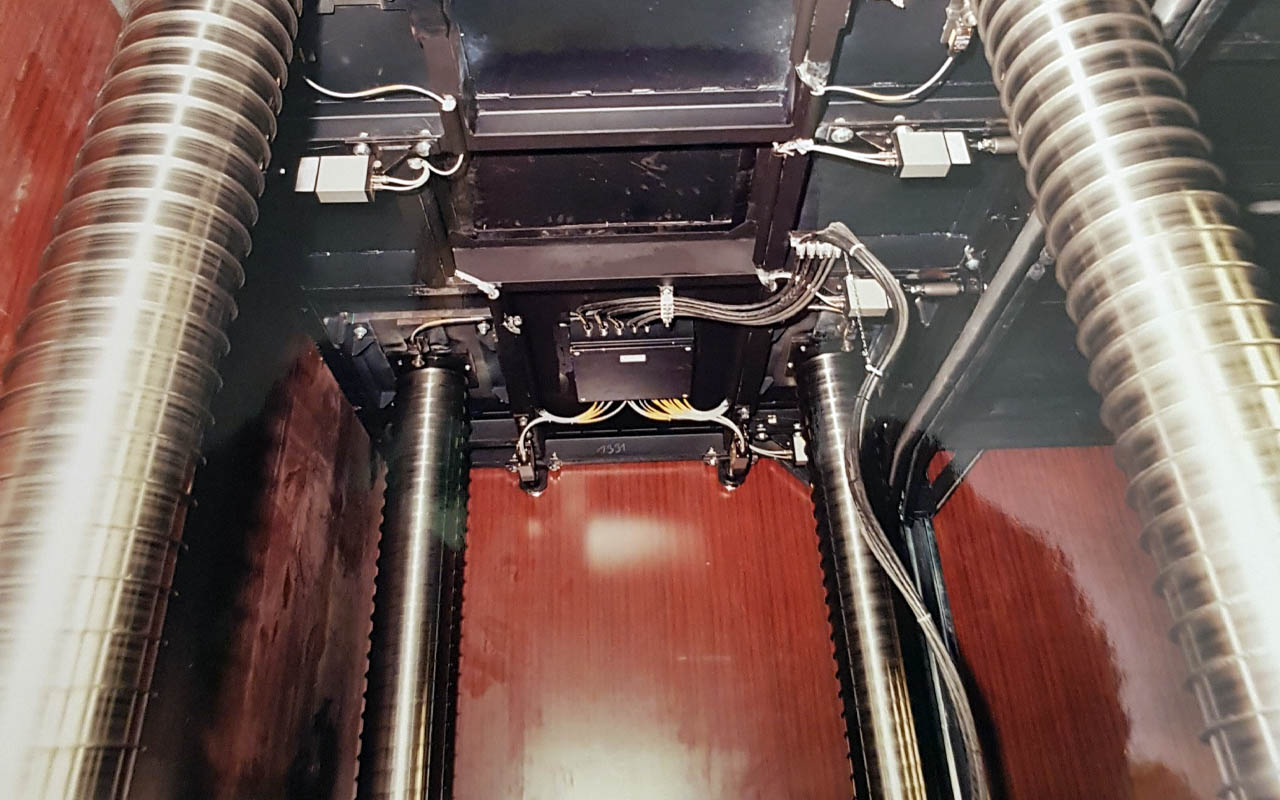 The Spiras have always to be preloaded.

The control system of the unit was created by the company BATIK and used the computer control of our partner company Guddland Digital from Luxemburg. It was the first time that the C⋅A⋅T V3 (Computer Aided Theater) was installed on a stage aboard a ship. We were still in the early days of computer controls and a lot of features had to be programmed on site. It was therefore necessary for the co-founder of Guddland Digital to lend a hand with commissioning. 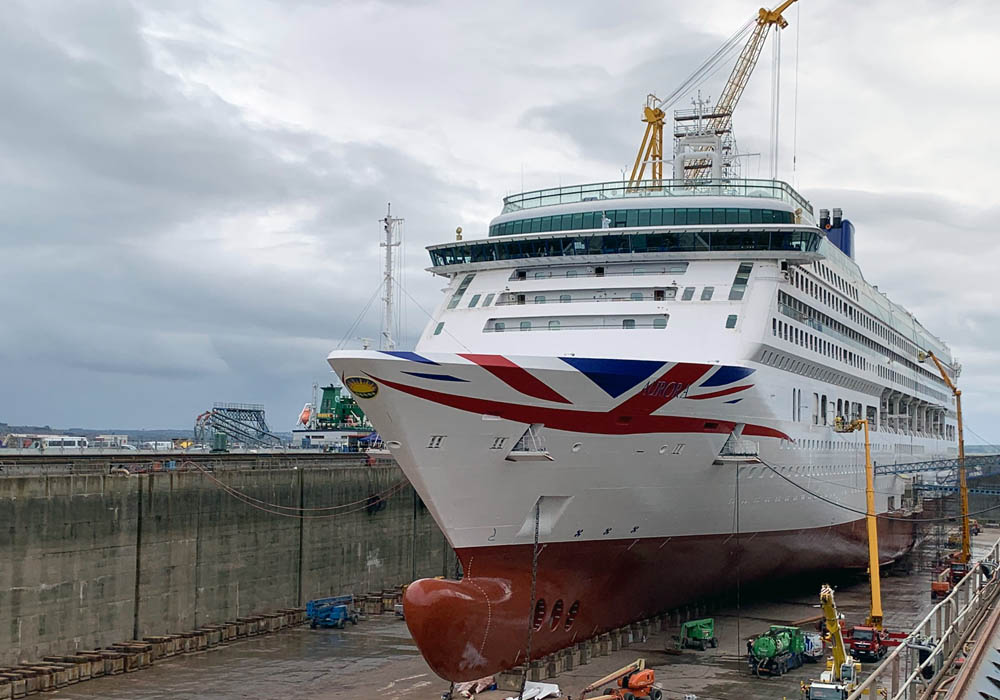 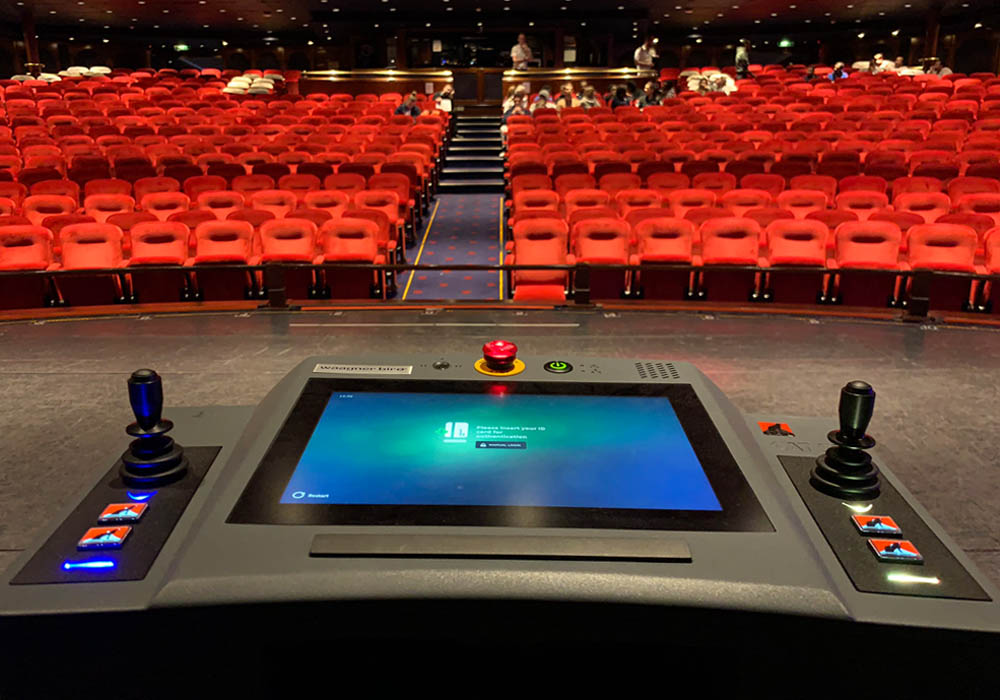 The AURORA was our first ship, and many more followed in Papenburg.

A lot has changed since; more and more new entertainment features are demanded on cruise ships, modern LED technique is now also in use as a common mobile feature. To date, Waagner Biro Stage Systems has equipped more than 30 cruise ships with complex stage machinery, and still there are fresh challenges in every new construction.

In 2019, more than 20 years after the first installation of stage machinery on the AURORA, Waagner Biro Stage Systems was commissioned to modernise the control system for the lower stage machinery and update the C⋅A⋅T V3 to C⋅A⋅T V5