From drawing board to construction site

One of the largest projects in the company’s history

The traditional building in the historical district of Berlin Mitte was first opened in 1742, but during its 250 year history the building has undergone several substantial alterations due to fire and war damages. Most recently during the 1950s, according to plans drawn up by architect Richard Paulick. The State Opera has been listed as a heritage protected building since 1979.

After more than 50 years in theatrical operation, a complete renovation was needed for the entire building consisting of the five building sections (the auditorium, the fly tower, the underground link, the rehearsal centre and the administration building).

The aim of these works was not only to preserve the building but also to meet the standards of contemporary theatrical performance. Further aims of the works were to improve sight lines from the auditorium onto the stage and the spatial acoustics and the reverberation time. The installation of new stage machinery weighing many tons, whilst complying with the requirements of historical building protection, constituted significant challenges. The volume of the auditorium was enlarged in order to meet the acoustic requirements. This was achieved by lifting the historic ceiling from the 1950s.

For Waagner-Biro Stage Systems, this project is one of the largest in the company’s history. Not only the complex technology, but also the structural conditions were a major challenge that could be successfully mastered.

The State Opera was reopened on October 3, 2017 after years of renovation. Originally planned for 2015, surprising finds from the Middle Ages and the high groundwater level delayed the ambitious rehabilitation plan by many months. 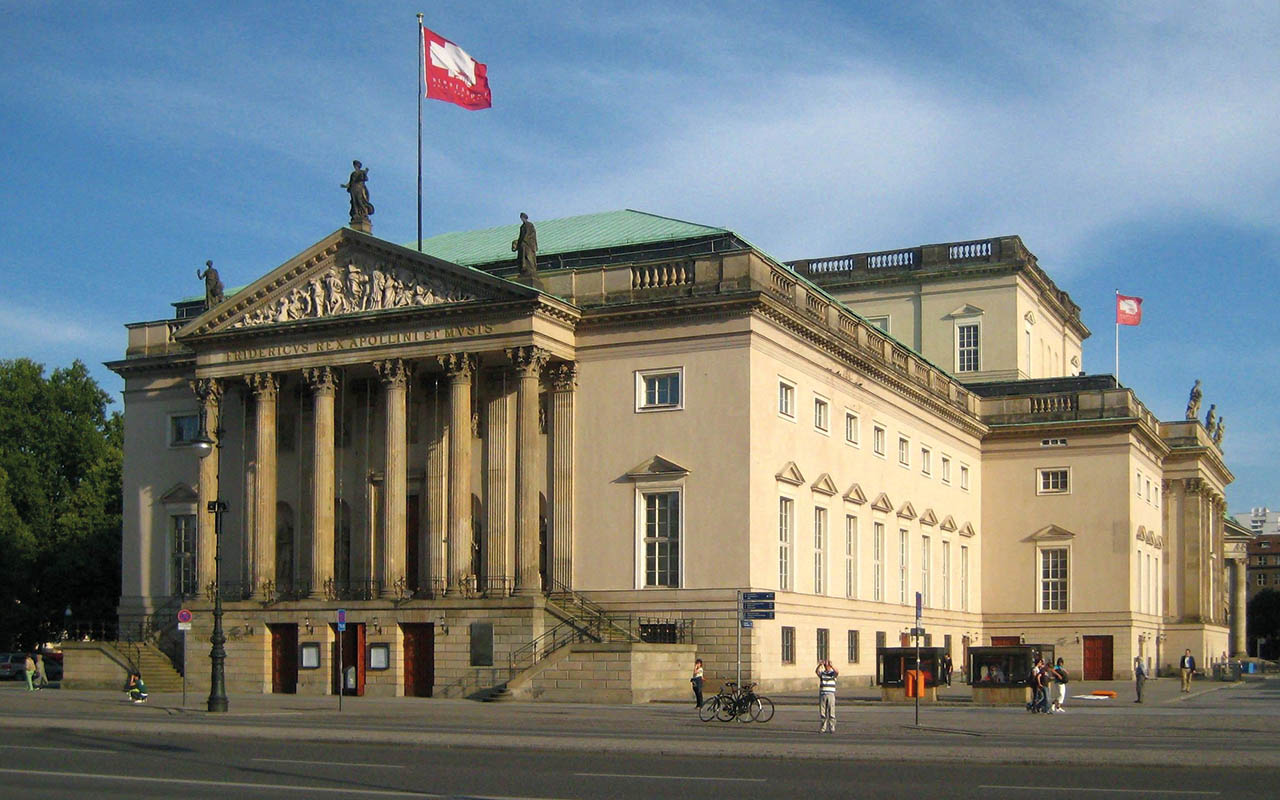 Alexander Biedermann, working as our deputy construction supervisor in Berlin, was heavily involved in the restoration of the Staatsoper Unter den Linden (Berlin State Opera). He started in January 2012 as a design engineer for the lower machinery. He then felt he also wanted to be part of the on-site assembly and commissioning. And that is how he came to be working directly at the State Operas construction site, where he has been supporting our site manager, Henrik Abromeit, since July 2015.

The biggest challenge he faced, apart from the stressful day-to-day operation, was the complexity of the stage machinery and its assembly. This sacrifice, however, more than paid off when the podium he himself constructed was brought to life and he was there to witness it. It is not only the commissioning that will be remembered, but also the unique experience of seeing Waagner-Biro Stage Systems, together with builders, planners and operators, implement the new stage machinery for the State Opera Unter den Linden.

WB Stage: Construction at the State Opera Unter den Linden in Berlin is completed. How is it to be back in Vienna after 2 1/2 years in Berlin?

WB Stage: After returning, you started a new role in Waagner-Biro Stage Systems. Can you tell us a little more about it?

A. Biedermann: My current role covers the planning and preparation for installations, as well as working on offers to improve the preliminary installation planning, and to bring in my know-how from the daily routine on the construction site. My work is certainly very varied. I support many different ongoing projects and travel a lot.

I also have responsibility for the cost centre and employee management, both of which represent new challenges. As I have a wide range of duties, it can get very turbulent in my current position.

WB Stage: What influence does your experience in Berlin have on your new tasks or on future Waagner-Biro Stage Systems construction sites?

A. Biedermann: I have significantly increased my installation know-how both mechanically and electrically. The experience with drive technology implementation and control has been especially invaluable to me.

I already got to know a large number of my current colleagues in Berlin. Because of that, starting here was somewhat easier and the personal connections were already present. The experience in a leading role on the construction site was a good basis for my current position with Waagner-Biro Stage Systems

WB Stage: Would you go on a construction site again?

A. Biedermann: Yes, definitely. It was a very demanding, yet instructive and eventful time. If one has the opportunity to work on site at international construction sites, one should definitely take it.

WB Stage: What are the challenges of a well-functioning construction site?

A. Biedermann: For me, the challenges include managing my own team, the planning, coordinating the logistics of our trades as well as foreign trades (construction, house technology, restorers,…), consulting with clients and consultants, as well as my own time management.

Especially with technical problems and in making decisions, a quick solution is needed so as to not cause any down time.

WB Stage: What personal experiences did you have and how do they influence your new position?

A. Biedermann: During my time in Berlin, I learned a lot from my colleagues in installation, commissioning, and control system. Over the course of the year, I made many new contacts and international friends. My language skills improved, too.

The close contact with customers, consultants and construction managers on site was also something new. I had the opportunity to get to know both, the technical and artistic processes on the stage of an internationally acclaimed opera house.

WB Stage: How do your colleagues benefit from your construction site experience?

A. Biedermann: I have learned who has which competencies and what knowledge is required for what jobs. This enables me to now deploy my colleagues accordingly. Bringing in installation know-how is also a great support for colleagues in the mechanical department. In order to keep installation times as short as possible, it is very important to also coordinate and adapt the building process with the customer and the other trades on site. I also gained experience in this area.

In the fly tower, disassembling of the stage equipment was first and the building secured with anchors to prevent it from floating upwards. Steel sheet waterproofing up to 3 cm thick was installed. The principle for this type of sealing comes from shipbuilding. An expert checked every centimetre of the 7-kilometre-long weld joint to ensure that it is impermeable.

A load-bearing steel frame was installed alongside the outer walls in the fly tower. This frame will transmit the loads of the upper machinery as well as of the roof itself onto the existing foundation piles. To avoid overloading of the existing piles, Waagner-Biro equipped the supports of the new roof trusses with a load measurement system.

After successful installation of the fly loft plus roller tracks and pulley blocks, works continued in April 2015 with the assembly of five gallery levels on the left and right side of the fly tower. Owing to the prevailing structural conditions, these works had to proceed not only at dizzying heights but also within a severely confined space 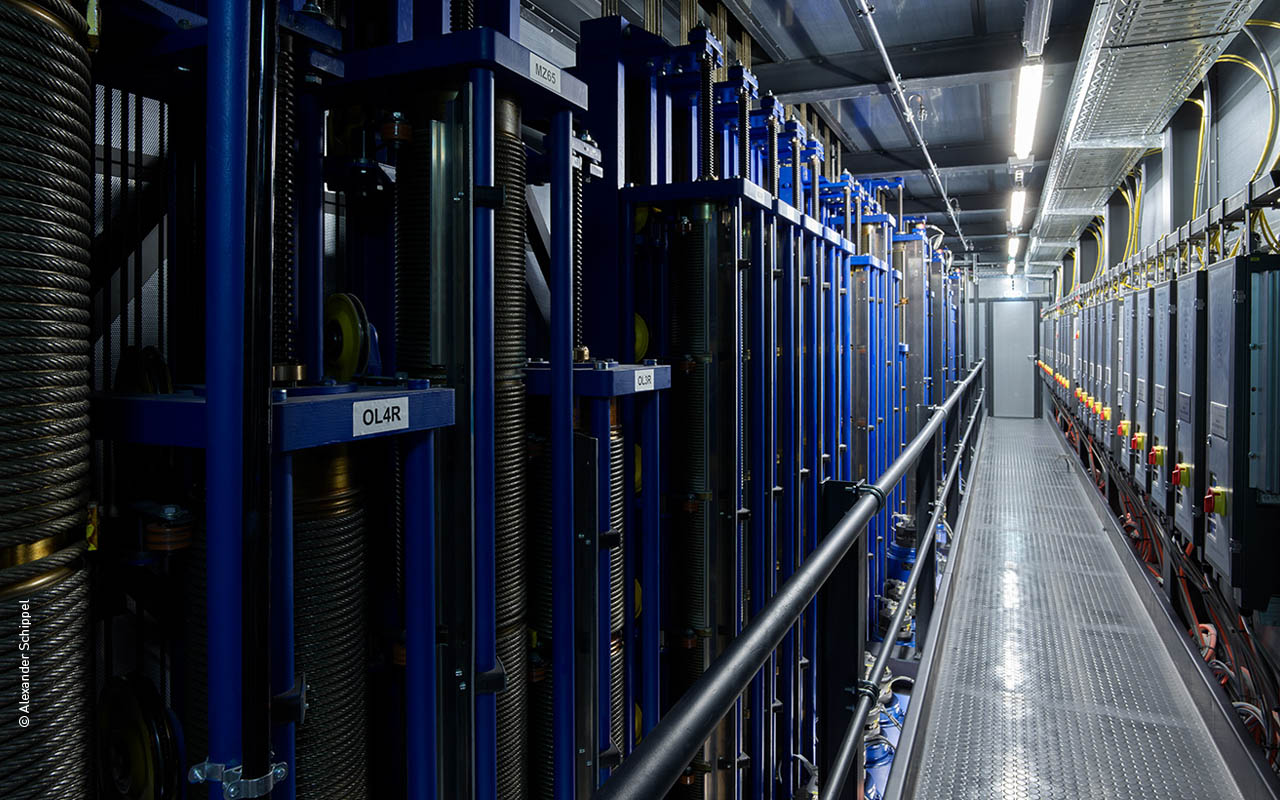 Sound-proof, suspended machinery rooms were created behind the galleries. 107 hoists were installed in these rooms on both sides over two levels. To achieve this, the winches had to be lifted to a height of 10 meters. We managed to complete the installation within two weeks. All winches were placed on flexible suspensions in order to make the entire system as silent as possible.

In summer 2015, the next challenging step of this project started: the installation of the lower stage machinery with an empty pit of 7,000 m³ (21 x 29 x 11.5 m). To meet the originally very tight schedule the installation concept was based on bringing in pre-assembled parts from outside the building from beginning of the design phase. Therefore Waagner-Biro Stage Systems installed two crane rails outside and inside the building. The heaviest piece we delivered weighted 8.8 tons. 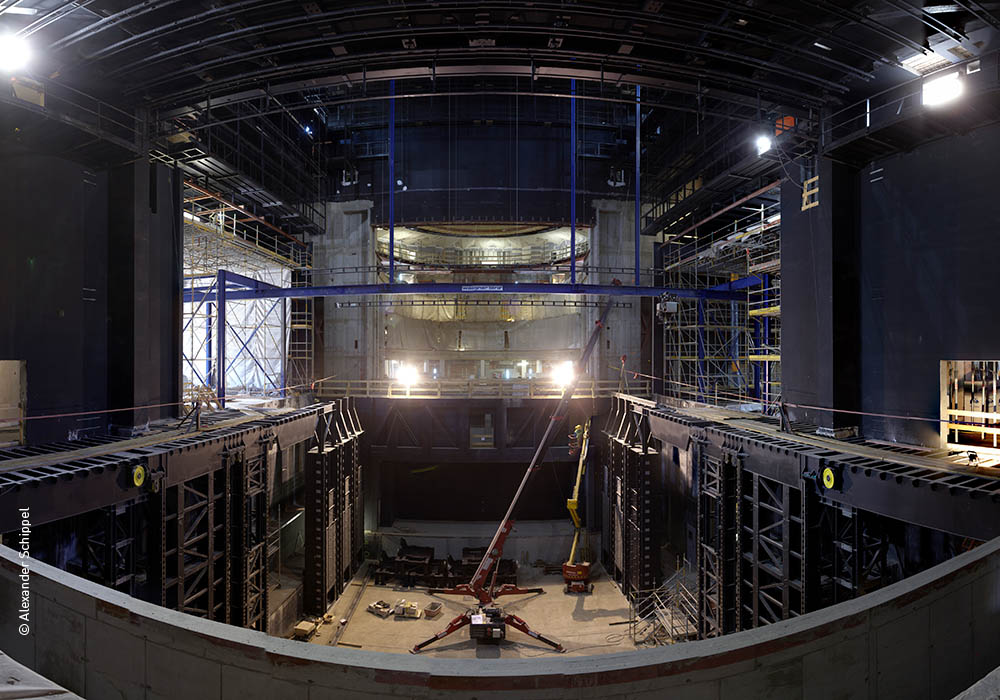 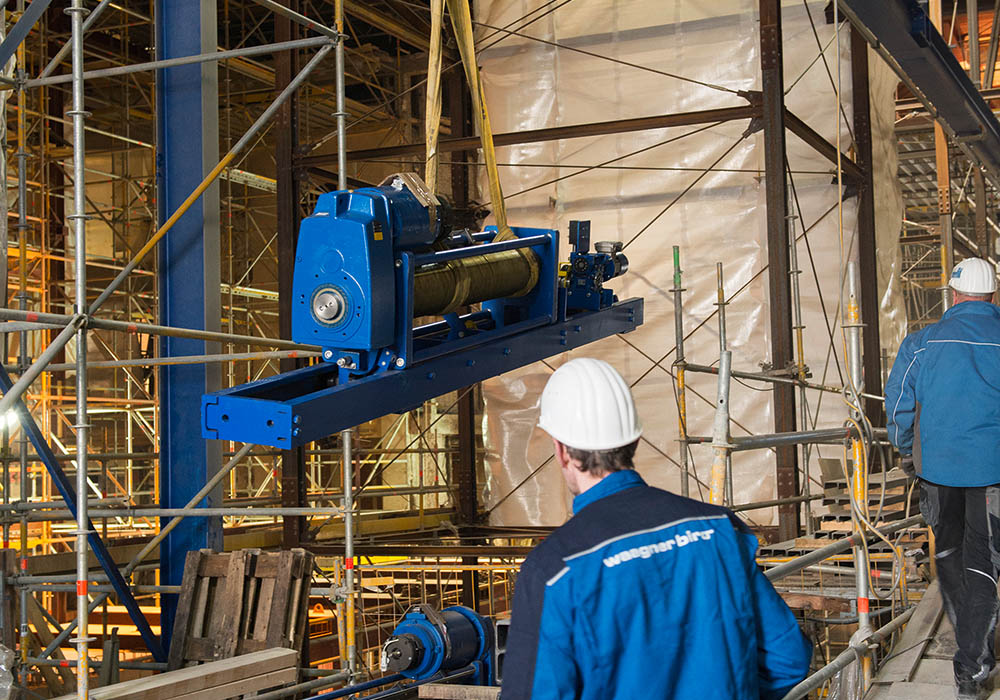 The main stage comprises a total of eight platforms, including four double-deck platforms. The transport platform and compensating platforms for lowering the revolving stage waggon are located in the wings. Three trap doors may optionally be installed in platforms 1 to 6. To use the orchestra pit creatively, the platform consists of a number of elements (main platform, compensating platforms, passageways and bridges).

The lower stage machinery was designed with a special focus on optimizing the acoustics. To this end, some of the drive system of the platforms was realized by ropes. Some platforms are equipped with vertical, others with horizontal winches. These winches were also placed on flexible suspensions and are additionally covered with sound-proof cladding. The total surface of stage area is 1,330 m² thereof 500 m² main stage, 250 m² side stage each and 330 m² backstage. 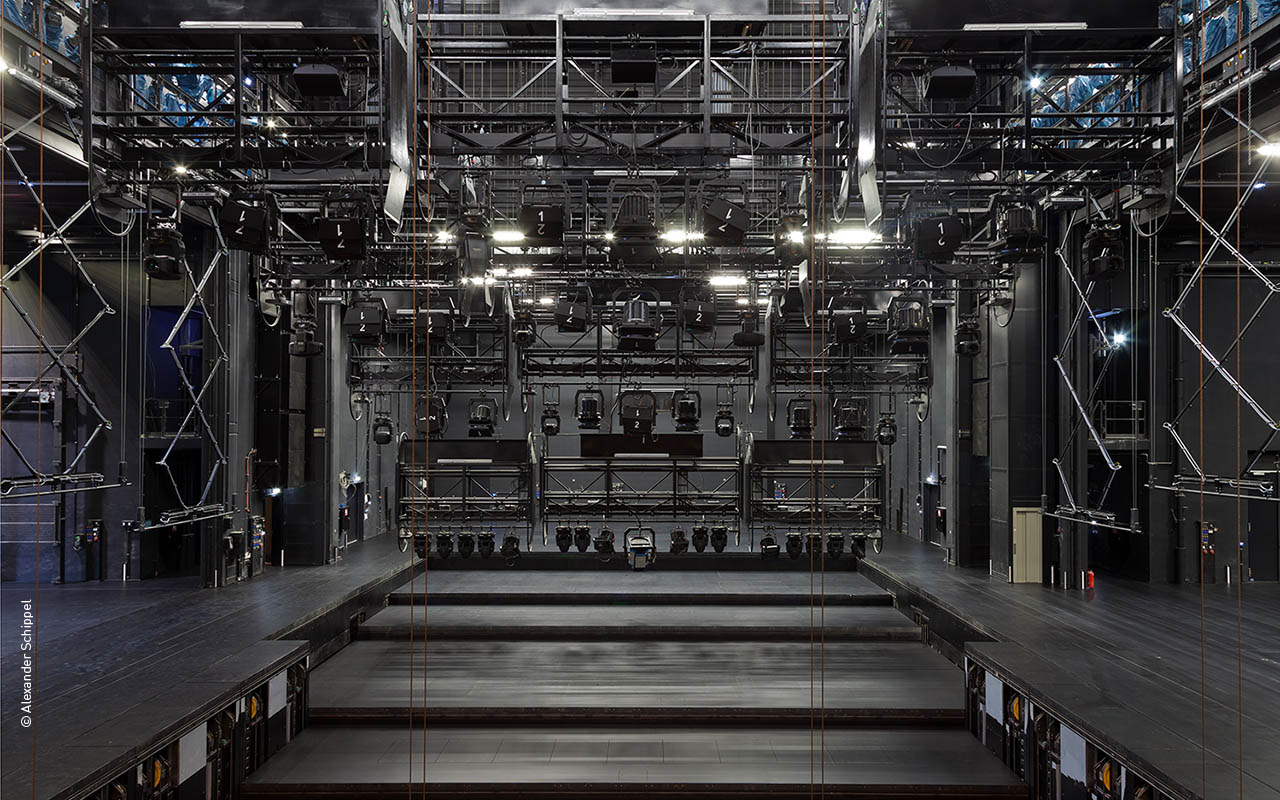 The underground link not only enables scenery elements to be quickly transported on trolleys so that they are protected from the weather but also ensures that the various State Opera buildings are internally connected with one another in logistical terms. For example, the necessary technical rooms are located in the underground link. All the supply lines, such as the electrical, heating, cooling and fire extinguishing ducts run through the underground link, which is therefore of particular importance for the State Opera’s technical provision. In addition, there are areas used for pre-assembling and storing stage scenery and decorations.

This underground link was constructed during the refurbishment programme in order to improve logistical processes during theatrical operation. In future, it will thus be possible to move original parts of the scenery from the opera house to the new rehearsal rooms in the storehouse through the underground link. It may also be used during performances in order not to interrupt proceedings. This tunnel connects to the main stage via the Berliner wing (left wing) and provides, amongst other features, a freely movable stage waggon system with twelve 2 x 1 m stage waggons. This technical arrangement will facilitate the transport of equipment to and from the stage.

The rehearsal centre provides rehearsal facilities for the State Ballet, the choir and orchestra. A rehearsal space with the same dimensions as the main stage in the opera house was also created. This is where the State Opera ensemble will have their first opportunity to rehearse with the original scenery and the same stage size as in the opera house. The room can also be used as a second performance venue. A lifting platform to facilitate transport and movements has been installed by Waagner-Biro Stage Systems.